The handy old Schmitt trigger is the most straightforward, but it’s touchy to design and it will add a bunch of parts (an op-amp and a bundle of resistors).  I tried using a comparator chip, which is like the Schmitt trigger but simpler, but I found that it had a big limitation.  It worked, but the inputs can’t exceed Vcc – 1.5 V (the “common mode input voltage range” on the datasheet).  It can’t read a digital signal ranging between 1.8 (or more) and 3.3 V, so it would provide some amplification but not a lot.  I’m targeting 90% of Vcc as my threshold, so it should read anything below 3.0 V as low.  I also considered using another PNP transistor to amplify the difference between Vcc and the input voltage, but: that much amplification is risky noisewise, an extra transistor reduces the bandwidth too much, and the PNP transistor will produce a logically inverted signal.

Another option is to amplify the signal using crazy op-amp magic, but aaaaaaah no.

So I tried thinking like I’m supposed to for once, and I’m going to try a software solution.  AVR processors include an analog comparator, which I can (hopefully) use to amplify the digital signal coming from the infrared optotransistor.  The downside to doing it this way is that it bypasses the UART module, which means that the application needs to receive data manually (I can still use UART to transmit the signal).  Receiving data will tie up the processor, but as long as there’s enough time to run the receiver code it should be okay, I don’t foresee much data traffic.  Here’s a potential flow chart for the receive procedure: 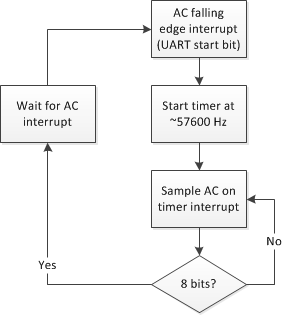 Failing that, I can look for an external comparator with a large common mode input range, or just suck it up and use an op-amp.