Update Jan. 10, 2013: This page talks about the Replicator 2, which we don’t have yet.  It should get here in February.  In the meantime you can use the Thing-O-Matic.

3D printers are used to convert 3D models on the computer into physical objects.  This is super-useful in our lab: students often need to make customized parts for their robots, and the 3D printer lets you rapidly design and create many of the parts you’ll need.

There are a lot of different kinds of 3D printer.  The CNC machine like those in the mechanical engineering machine shop are traditional 3D printers.  There are expensive printers like the ZPrinter that build up objects by fusing powder particles together.  Other printers based on open source hardware sacrifice resolution, process and build quality, and other properties to drive down prices into reach of regular people (and impoverished software engineering labs).  RepRap was the first open source 3D printer, Makerbot sold the first full 3D printer kits, and in the last couple years several companies have started selling derivatives of those designs.  Popular 3D printers include the Ultimaker, Printrbot, Prusa Mendel and the Type A Machines Series 1.  All these printers print in a variety of plastics.  The bleeding edge of open source 3D printing is projects like the B9Creator and the Form1.  Both printers print in resin that hardens when exposed to bright light; the former uses a DLP projector to harden layers of resin, and the latter uses a laser.  This process allows a high resolution, very high precision, and more freedom of design than RepRap-style printers.

In ECS 366 we have two Makerbot 3D printers, a Thing-O-Matic and a new Replicator 2.  This page will give you the information you need to get started using the 3D printers to make parts for your projects.

The first thing you need to do is generate a 3D model of what you want to print.  The model needs to be a 3D mesh in STL format.  Most 3D design software can export to STL.

There are a bunch of software tools you can use to create a 3D model.

The Makerbot uses a fused filament fabrication (FFF) process, which means that it constructs a model by depositing melted plastic strands that stick  together as the material cools.  When hot plastic is deposited on the warm layer below the layers fuse into an object. The nature of this process imposes some limitations on what you can print.

The plastic strand comes out melted, so if the printer tries to print over open air the strand will droop, or even fall down if it’s not supported on one side. There are a couple ways around this limitation.  First, as long as an overhang is more than 45° above the x-y plane it should be okay, if a little rough.  You can also add supports for overhangs by adding a strut at no less of an angle than 45°.  You can also support a cantilever or similar overhang by adding a 1-strand-wide (0.5 mm wide) support shell around its outline.  The shell it built up from the bottom layer and the part is printed resting on the shell, then the shell can be cut away with a utility knife when the object is finished.  See here and here for more information on building supports into your model.  The printing software also includes the option for automatically adding supports to the model.  Sometimes it’s easier to let the software do it for you, sometimes you can save print time and reduce material waste and surface roughness by designing supports yourself.  Here is an example of a model that was printed with automatically-generated supports, here is the model after the supports were removed.

If there’s too little material in a layer, the toolhead will slow down to give the layer time to cool down a bit and settle.  On the other hand, if the layer takes too long to print (i.e. the layer is too big) the plastic can cool off too much, and the next layer won’t fuse to it very well.

Fixing up the STL File

Sometimes your modelling program generates an STL file with some flaws.  For example, 123D (as of beta 9) doesn’t focus its polygons optimally, putting too many triangles on flat surfaces and/or too few on curves.  It’s not always a big deal to have too few triangles since the 3D printer is pretty low resolution, but if curves are triangulated poorly it can be obvious in the final output.  It’s not good to have a lot of triangles either, because more triangles means it takes longer to process the STL model before printing it (sometimes 123D produces way too many triangles, even on its coarsest setting). One solution to the problem is to generate the STL file with too many polygons, and then use another tool to reduce the polygon count intelligently.  MeshLab accomplishes this task effectively.  Import the STL mesh file to MeshLab, and open the Filters | “Remeshing, simplification, and reconstruction” | “Quadric Edge Collapse Decimation” dialog.  The dialog automatically selects half the number of faces that are in the original model, and you can tune it manually.  Hit the Apply button, and if the model still looks okay then you can export the mesh (select “Flat Lines” mode to see the polygons). 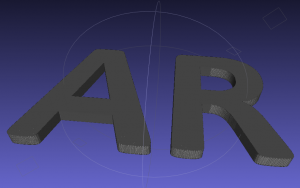 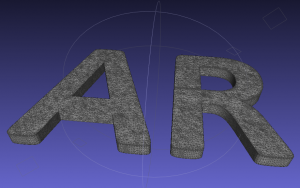 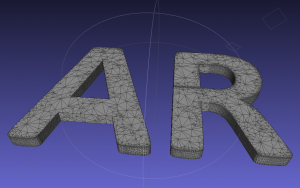 MeshLab doesn’t always produce good output, especially if you remove too many polygons.  ReplicatorG sometimes complains if the mesh that MeshLab produces is not manifold, meaning that there’s a hole in the mesh and it’s hard to tell the difference between the inside of the object and the outside.  This complaint happens with the output from other tools as well, particularly Google Sketchup and Blender if you’re not careful.  Skeinforge can usually figure out what to do after a bunch of number crunching, but you can help it out by running the STL file through the STL repair tool at netfabb.  N.b. the netfabb tool will destroy any internal geometry and small holes that you might have  purposely designed into the model.  Meshlab can also mess up the decimation process by adding surfaces with 0 volume, I have no idea why it does that or what you can do to fix it.  Because of the potential problems with using Meshlab I recommend avoiding it if possible, but it can be very useful in some situations.

Our Makerbots use different types of plastic: the Thing-O-Matic prints in ABS, the same plastic that Legos are made from; and the Replicator 2 prints in PLA, a biodegradable material.

Different ABS spools have different physical properties.  In particular, plastic from different spools might melt at different temperatures.  There can be a variety of causes, including the extrusion process and colourants.  Most colours we have flow well at 225°C.  Some colours, notably our current black plastic, don’t flow well until the temperature reaches 235°C.  At 225°C the black plastic prints but the model layers don’t fuse well and the output is unreliable (it misses parts of strands).  Unfortunately turning up the temperature releases stinkier fumes (as far as I can tell the fumes are safe at the temperatures we’re using, but some people may be more sensitive to the fumes than others).  You can open a window to help clear out the fumes, but make sure the air in the room doesn’t get too cold, or it will cool the plastic too quickly and the model’s layers won’t fuse together well.

PLA melts at a lower temperature than ABS (usually around 190°C or so), and burns if the temperature is too high.  It does not flow as smoothly, and is less compliant at room temperature.  It dissolves in acid.

Configuration for First Use

These steps only need to be performed once per username.

Generate the GCode (see below for more information).

The GCode generation settings are persistent across runs of RepG.  Some of them (steps 2 and 4-7) you can skip after you’ve done them once.  Others (steps 3 and 8-11) you might change, depending on what you’re printing.