The RTOS API is fully documented is os.h, so I won’t cover it.  For now this page will stick to the internals in os.c that will be useful to understand when you implement your RTOS in project 3.

The central feature of every RTOS is its task scheduler.  The scheduler is what makes the RTOS real-time.  As such, the RTOS we use (which I refer to as “the RTOS” in this page) is pared down to the point where it’s really only a glorified scheduler, but it’s still useful as an illustrative tool.  When we create a project with the RTOS we define a series of tasks that are given different priorities–system, periodic, and round-robin–as described in os.h.  Each task has its own stack, and statically allocated memory can be shared without restriction.  A separate RTOS kernel uses the global stack.  The memory layout looks something like this (address 0x0000 corresponds to the bottom of the diagram): 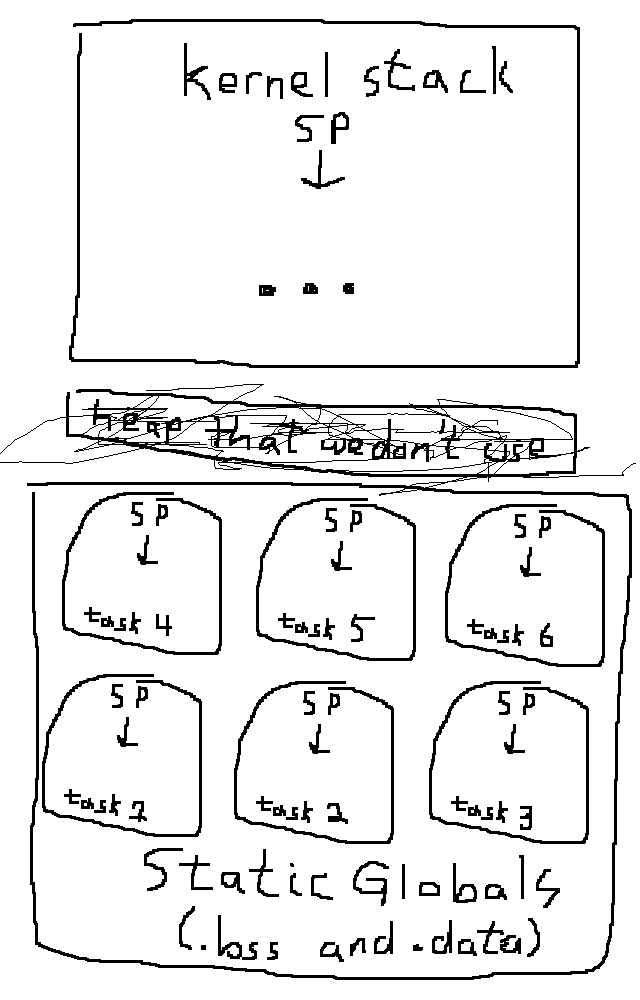 Memory layout in the RTOS

N.b. the six task workspaces shown are part of the .bss segment of memory (there might be other .bss stuff above the workspaces).  As always, we turn up our noses at dynamic memory allocation on the heap.

Entering and Exiting the Kernel

The kernel is switched to from API calls and back using the enter_kernel and exit_kernel functions.  If you look at those function signatures at the top of the os.c file you’ll notice that they’re declared with the attributes noinline and naked.  The noinline attribute indicates to the compiler that it should always call the function using the call instruction instead of inserting it inline with the caller.  The naked attribute tells the compiler not to insert implicit prologue and epilogue code into the function’s assembly code.  An example of prologue code is at the beginning of an ISR, when the MCU context (status register, general purpose registers, etc.) is automatically pushed to the stack; the ret and reti return instructions are examples of epilogue code.

The exit_kernel function is pretty much the reverse:

Step 5 indicates why the functions need to have the noinline attribute: the call instruction pushes onto the stack the address of the next instruction after call.  That address is part of the call frame.  The ret instruction pops that address back off the stack and puts it into the program counter (PC).  If the enter_kernel and exit_kernel functions are inlined, then there’s no call frame on the stack.  Let’s zoom out and look at how an API call from a task works:

So the functions must be noinline because if there’s no call frame on the stack, the exit_kernel function can’t return into the task.  Got it?  Good!

The TIMER1_COMPA_vect function is also interesting.  Its prototype is declared at the top of os.c with the signal and naked attributes.  The signal attribute means that the function is an ISR.  It gets mapped into the interrupt vector table, and normally the compiler would generate a context switch when the function is called and would generate a reti (“return from interrupt”) instruction instead of ret when the function returns.  Except that the function is also declared as naked, which tells the compiler not to generate any context switch code or return instruction.  The addition of the naked attribute is why it’s declared using the prototype+implementation style instead of using the ISR macro.  (N.b. avr-libc allows the option to define extra attributes in the ISR macro; I’m not sure why the RTOS doesn’t use that functionality, it might not have existed when the RTOS was written, or the students might not have known about it, or maybe it legitimately doesn’t work)

The timer interrupt operates much like an API call that’s automatically generated on the RTOS tick.  It stores the interrupted task’s execution context, sets the “tick” kernel request, switches to the kernel context, and then returns into the kernel.  The main difference is that the RTOS implemenation has to set the I bit in the SREG value that gets pushed to the task context.  You’ll recall that the I bit is the global interrupt enable bit, so setting it ensures that global interrupts are enabled when the task starts back up.  We can do that because we know that global interrupts were enabled, otherwise the timer ISR wouldn’t have been able to run.  We have to do that because the I bit gets cleared automatically inside of a function decorated with the “signal” attribute, so when the task context was pushed onto the stack at the start of the interrupt handler the I bit was stored as 0 when it should have been stored as 1.

Finally, the timer interrupt’s naked attribute allows us to use the ret instruction instead of reti when the function returns into the kernel.  The difference between the ret and reti instructions is that the reti instruction sets the I bit when it executes.  We don’t want interrupts to be enabled in the kernel, so we do a regular return that leaves the I bit cleared.

The RTOS initialization function bears some explanation.  It’s mostly straightforward: it sets up the timer that generates the RTOS tick, initializes the task descriptors, does some error checking, and at the end it enters the kernel main loop.  It also creates two tasks: the idle task, and the main task.

The int main() function is implemented in os.c, and simply calls OS_Init.  OS_Init, in turn, creates a system task for the function r_main(), which is the user-implemented startup function.  In r_main() the user will set everything up for the application, do initialization stuff, create the tasks that will run, etc.

You’ll notice that the r_main() function returns, which is contrary to the rule that the main() function should never return.  In this case it’s okay.  Obviously the r_main() function needs to return because it’s run by OS_Init as a system task, and system tasks have the highest priority and cannot be pre-empted.  If r_main() didn’t return then it would starve out all the lower-priority tasks.  The main() function also doesn’t need an infinite loop after the call to OS_Init because OS_Init enters the kernel main loop.  In other words, OS_Init isn’t just an initialization function; the whole program runs inside of OS_Init, and OS_Init will never return to the main() function.  Once the RTOS is running the system can be in three states: in a user task, in the kernel, or in the idle task.

Each task has its own stack located in its task descriptor.  By default 256 bytes are reserved for the task stack.  The task descriptors are held sequentially in the .bss section of data memory, which means that stack overruns will result in other task descriptors and/or global variables getting clobbered.  Usually stack overruns don’t happen–256 bytes is a lot if you think about it–but there are a few things that you should watch out for:

There are ways to avoid the problem.  The obvious one is to make the stack bigger, which you can do as long as there’s enough data memory left for the kernel stack.  Another way is to offload some of the stack space into static memory (the .bss and .data segments) by declaring local variables as static or by using global variables.  I discuss that further in this article.

The AVR architecture stores instructions in the program (“text”) section of memory, held in Flash.  Program memory is normally accessed by two-byte words addressed with 16-bit addresses.  Therefore the maximum memory size that can be addressed is 2 * 216 bytes, or 128 KB of Flash.

Except Atmel sells AVR CPUs with more Flash than that, e.g. the ATmega2560 that is used in the Arduino Mega 256 and our STK600 dev boards.  What the heck, Atmel???

AVR8 controllers with more than 128 KB of Flash use extended addressing to address data in the upper part of memory.  In order to address 256 KB of program memory the CPU effectively uses 17-bit addresses, with the extra bit stored in the EIND (extended indirect) register.  The compiler calls functions in extended memory using special instructions (e.g. eicall) that concatenate the EIND register with the 16-bit function pointer.  You can find more details on the AVR instruction set here [PDF].

Typically programmers don’t need to worry about extended addressing.  It’s rare that code will even exceed the 128 KB boundary, notwithstanding large data tables that you might offload from data memory into Flash.  If there is more than 128 KB of code, the compiler will handle everything.  Unless you’re using the RTOS of course, which doesn’t support 17-bit addresses by default.  The RTOS needs to store the EIND register with task contexts, and needs to initialize the call frames in the task contexts to use a 3-byte return address instead of 2 bytes.  A former CSC 460 student modified the RTOS to support extended addressing.  His report is here [PDF], and his code can be found here [ZIP].