Most of the important details for using the nRF24L01 radio are in my report, but it doesn’t cover Arduino stuff and it’s a little out of date.

There should be a radio debug station in the lab that you can use to test your radio.  If you send a properly formatted packet to the debug station, it will print the message you send and transmit a reply.  Note that if you don’t read this reply using Radio_Receive, your radio will stop working.  In fact, if you ever don’t read a reply out of a radio then it won’t assert the interrupt pin when it receives new data, and the driver will stop working until you either read the packets out or flush the buffer (using Radio_Flush).

The ACK type of message is different from an auto-ack packet.  Each time Radio A transmits a packet to Radio B, Radio B transmits a little acknowledgement packet called an auto-ack.  You will never see this happen, it’s entirely behind the scenes.  If Radio A doesn’t get the auto-ack, it will try re-sending its packet five times before giving up.  Here is a message sequence diagram for the debug station protocol: 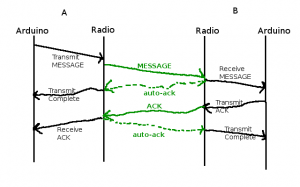 Message sequence diagram for debug station protocol. Station A is the user and station B is the debug station (an intelligent person would make this clear this in the diagram).

Yes, you have to copy your own address into the MESSAGE packet.  The debug station won’t know where to send its reply otherwise.  The receiver has no other way to identify a packet’s source address.

Read the first section of this page for information on the packet structure.

I’ve given you a default packet structure that is suitable for communicating with the debug station.  It defines two packet types, a MESSAGE packet and an ACK packet.

In our packet structure, we use a union to choose how to access the packet’s payload.  For those of you who haven’t used unions: a union is just a construct used to access one chunk of data in different ways.  It provides a kind of polymorphism to C code, without adding the danger of casting pointers.  In the default packet, if the packet.type is MESSAGE, then we access the data through the union member “packet.payload.message”.  This allows us to organize the raw data bytes into variables that are relevant to the MESSAGE type of packet.  If packet.type is ACK then we access the data through the “packet.payload.ack” member.  There is nothing stopping you from accessing the contents of an ACK packet through the “packet.payload.message” member, but the contents of that member will be all crazy and useless because the variables will access the wrong bits.

You will have to define data structures and add them to the union in packet.h to define your own packet formats that are relevant to your project.

The CE and CSN pins can be connected to any digital I/O on the Arduino, just change the definition at the top of radio.cpp.  The IRQ pin can be moved to another interrupt if you really really want to.  The MISO, MOSI, and SCK pins cannot be changed.

You’ll notice that on the Uno, the SCK pin is on the same output as the built-in LED.  Don’t use the Uno’s built-in LED if you’re using the radio.  Use your BlinkM LED or we have some other LEDs sitting around in the lab that you can plug into other I/O pins.

If you’re having trouble with my driver, try the one on the Arduino playground.  At your own risk.  I’ve never used it, but I’ve heard it works.

Resetting the Arduino doesn’t necessarily reset the radio, which can prevent the radio from initializing properly.  You can avoid this problem by wiring the radio’s Vcc pin to an Arduino digital output pin.  At program startup, set that pin low for 100 ms and then high before calling Radio_Init().  This will reset the radio, ensuring that it is ready to be reinitialized.

Aside: The digital I/O pins on Arduino can provide up to 40 mA safely.  The radio uses less than that, so it’s okay to power it from an I/O pin, but it is not safe to power all devices in this way.  Also, the Arduino can’t draw more than 200 mA of current, including the current used to power the AVR microcontroller plus any current being drawn by the digital I/O pins.  Interesting fact: AVR I/O pins are symmetrical, which means that you can set a digital output to 0 and have it sink up to 40 mA of current to ground.

Click here to see a couple of example programs that use the radio driver.

Things That Can Go Wrong

Your program will not compile if you don’t define the radio_rxhandler function (it can be empty if you don’t expect to receive packets).

If you are having trouble sending messages to the debug station, it may be due to RF interference with other groups using the radio.  There are several steps you can take to avoid problems:

If the Radio_Init function still never returns, the IRQ pin might not be connected (the attachInterrupt call hangs).  You can use the continuity tester in a multimetre to verify that the wire isn’t broken.