The nRF24L01 provides a robust interface for configuring its settings and sending and receiving data. It uses a 4-wire Serial Peripheral Interface (SPI) bus, so the AT90 can communicate with the radio firmware easily using the AVR’s built-in SPI module. The firmware interface is based on a set of registers that can be written to and read from, and several 1-byte instructions for commanding the firmware to perform various tasks. To do something on the nRF24L01, the microcontroller sends an instruction over SPI, usually followed by 1 or more argument bytes. When loading packets onto or off of the radio, the microcontroller must disable the transciever by driving the radio’s CE pin low.

The driver hides the firmware details from applications, but it is useful to understand how the radio works (especially when dealing with bugs in the driver).

The registers are used to configure the different settings and features that the nRF24L01 has available. Each register (except the three payload registers) has a 5-bit address that is masked into the R_REGISTER and W_REGISTER instructions (see below) respectively to read and write to the register. The following registers are available:

There are two packet queues, or FIFOs, in the radio, one for received packets (the Rx FIFO) and one for packets to transmit (the Tx FIFO0. Each FIFO can hold up to three packets. If a transmission fails then the packet is not cleared from the Tx FIFO, it has to be removed using the FLUSH_TX instruction (see below). The Rx FIFO is different from the Rx pipes: a pipe refers to one of the up to six addresses by which the radio can be addressed, whereas the Rx FIFO is the 3-packet queue in which received packets are stored until the microcontroller reads them out of the radio. All six Rx pipes put data into the same 3-packet Rx FIFO.

When the Tx FIFO is full, adding packets to the FIFO pushes the oldest packet out of the queue. When the Rx FIFO is full, new packets are dropped until a space in the FIFO becomes available.

The nRF24L01 is controlled using twelve instructions that can be sent over the SPI bus. An instruction must be sent using this process:

Whenever an instruction is shifted into the radio, the radio’s status register is concurrently shifted back into the AT90.

The nRF24L01 supports the following instructions:

Here is the system state diagram, copied from the nRF24L01 product specification, page 20: 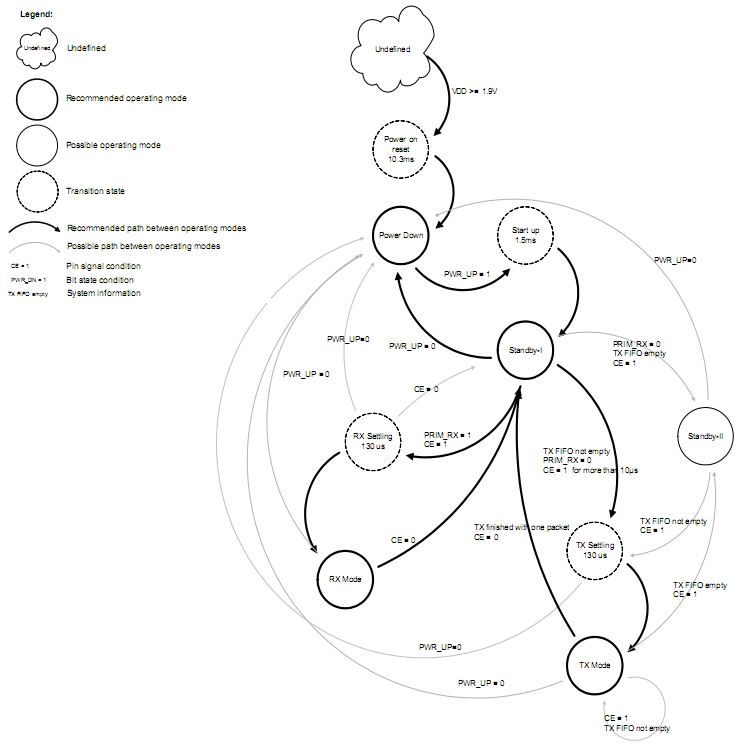 Before loading packets into or out of the radio, the controller must set CE low. This will ensure that the radio properly transitions into Standby-I mode (immediately in the case of Rx mode, or, in Tx mode, once the current transmission completes).

To enter Tx Mode from Standby-I, the controller only needs to pulse CE high for at least 10 μs. In this project CE is held high for the entire transmission.

There are some important timing requirements that need to be taken into account:

In older radios, including the TXRX24G, this packet had a maximum size of 256 bits. The nRF24L01 does not have this constraint except for compatibility with older radios.

The payload length field is used for the dynamic payload feature. The PID field is a packet identifier. It is incremented every time a new packet it sent, so re-transmitted packets have the same PID as the original. It is used in conjunction with the CRC field to determine if a packet is a re-transmit. If the PID and CRC fields of an incoming packet are equal to those of a packet that has already been received, then the new packet is discarded as a duplicate of the old one. The NO_ACK bit is used for selective ack—if NO_ACK is 1, then the packet is not acknowledged, even if auto-ack is enabled on the receiving pipe.

The radio can generate three interrupts:

Read and write the CONFIG register