The Roomba Serial Communication Interface (SCI) Specification is very useful and contains most of the information one needs to control the Roomba.  All the information about the Roomba SCI in this report was extracted from the specification and repackaged in a useful format.  I have also written a simple API for sending commands to the Roomba over its serial port, which I will describe here along with some information on using it with our real-time operating system (RTOS). 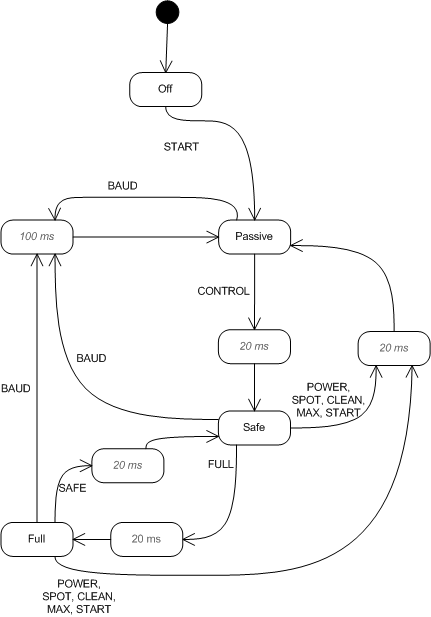 There’s a lot of documentation in roomba.h, but I’ll summarize the functions here.

Roomba_Init() should be called once during system start-up, with interrupts disabled.  It brings the Roomba through the state diagram above, into Safe mode.  It performs the following steps:

In total, the function takes around 3 seconds to run.  It’s not strictly necessary for Roomba_Init() to be called with interrupts disabled, but it’s a good idea (especially when using the RTOS) to do so to keep the timing correct.

Used to query the Roomba for some sensor information.  It fills out the part of the roomba_sensor_data_t structure corresponding to the requested group.

The sensor packet structure is defined in sensor_struct.h.  Most of the sensor values are straightforward 8-bit integers, but several are 16-bit integers.  The 16-bit values are defined in unions to make them easier to work with.  The 16-bit values are written to memory using the 8-bit high and low members of the union, which respectively access the high and low bytes of the integer.  The Roomba sends data in big-endian order, so the high byte is sent first; AVR is little-endian, so in memory the low byte comes first.  The 16-bit number is accessed using the union’s value member.

See the page on the Roomba Sensors for more information.

Allows the application to move the Roomba between the three states shown in the state diagram above (passive, safe, and full).  When switching to full mode, the function might recurse once.

Roomba_Drive() is a straightforward mapping of the Roomba’s DRIVE command.

The velocity can be between -500 and +500, and is measured in mm/s.  A negative value means drive backwards.  It’s best to avoid travelling at the full 500 mm/s.  The Roomba isn’t very responsive, so it’s hard to control at that speed.  Also, switching from +500 mm/s to -500 mm/s without slowing down in betweencan cause the Roomba’s bumper to lift off the floor, which triggers the cliff sensor and boots the Roomba into passive mode (if it’s in safe mode).  200 mm/s is a good cruising speed.  The Roomba’s actual velocity usually differs from the programmed value by a couple dozen mm/s.

The Roomba was made to go in circles, and the radius parameter determines how big the circle should be (again, this value is approximate).  The radius is measured in mm; it can range from -2000 to 2000 with negative radii corresponding to clockwise turns.  The value 0x8000 is a special case that means the Roomba should go straight, but of course it can’t actually go straight.  Even with a radius value of 0x8000 it will still drift from a straight line by between 3 and 6 degrees per metre.

The functions that control the Roomba’s LEDs are all pretty much the same.  The Spot, Clean, Max, and Dirt Detect LEDs are all on-off LEDs.  The Status LED has four states: off, red, green, and amber (i.e. red and green at the same time).  The Power LED allows you to specify one of 255 colours, with intensity ranging from 0 (off) to 255 (full brightness).  The Roomba SCI specification contains more information on the Power LED on page 4.

The driver keeps track of the expected states of all the LEDs.  All the LEDs are configured using one command packet, so the correct data for all the LEDs have to be sent every time one of the LED states change.  Unfortunately there’s no way to tell what the LED states actually are, but typically if they have changed due to external stimuli then the Roomba has been kicked back into passive mode so there’s nothing you can do about it anyway.

Load data into one of the Roomba’s song slots.  The Roomba provides storage for 16 songs, each of which can have up to 16 notes.  The notes are integers that match the MIDI numbering scheme for notes from 49 Hz to 12543.9 Hz (both G notes, 8 octaves apart).  The durations are integers, measured in 64ths of a second.  For example:

It is possible—but difficult—to string multiple songs together to create a song longer than 16 notes.  The note durations are not very accurate: a song that should theoretically take 8 seconds to play might actually finish after about 7.8 seconds.  There is no way to tell when a song has completed using the Roomba sensors, so you have to tune a delay to wait for one song to end before starting the next.  If you try to play the next song before the first one completes then the second one will not play.  I have found that a song needs to start at most 5 to 10 ms after the previous song finishes for the break in songs to be not noticeable.  The Roomba puts a 5 to 10 ms delay between notes within a song.

Command the Roomba to play the specified song.  If there is already a song playing, or if there is no song loaded into the slot, then nothing happens.