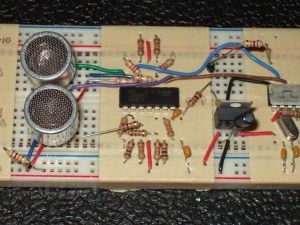 I’ve previously described the power supply and transmitter for my acoustic modem.

The receiver circuit completes the modem’s hardware design.  It is simply a two-stage amplifier that gives a total gain of about 2000, in series with a band-pass filter.

The acoustic transducer produces a beautiful sine wave with nearly no noise.  I found that I could apply a huge gain to its output and the amplifier’s output would still be clean: the raw (unfiltered) output has a 5 V offset, and the signal fits into the 5 V above the offset.  In other words, the output is at -5 V when idle and peaks at around 0 V when the receiver receives a signal.

The goal is for the receiver to output a signal that is around -10 V when idle and peaks at -5 V when it receives a signal.  These voltages correspond respectively to logic low and high on the microcontroller.

END_OF_DOCUMENT_TOKEN_TO_BE_REPLACED 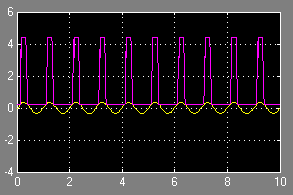 I was looking for a way to convert an analogue signal into a digital signal, and came across the Schmitt trigger.  This is a great little circuit that you can build with a couple transistors or with an operational amplifier.  I tried to build a transistor-based simulation in Simulink, but it didn’t work right away.  My op-amp simulation did work, so I stuck with that.

This is incredibly useful.  To the left you can see a 0.3 V sine wave being converted into a 5 V binary signal (actually a 4.5 V signal, since I added a diode in series with the output to keep it from going down to -5 V).  It also effectively filters out any input jitter that doesn’t cross the threshold needed to change the output state.  Microcontrollers have Schmitt triggers on their digital inputs.  For example, an AVR microcontroller being powered by 5 V typically considers a 0 logic level to be under 1.5 V and a 1 logic level to be over 3 V.  If the input sits between 1.5 V and 3 V then the digital state remains whatever it was before the input entered that region.

Alas, it’s not a perfect circuit.  I used an online calculator to figure out what resistances I needed for my project.  Configurations that worked in the calculator and in simulation didn’t work in reality, either producing no output or something more like a sawtooth wave than the square wave I expected.  It’s probably a limitation in my op-amp—maybe the signal is too high-frequency, I didn’t investigate very deeply.